Meet the creator of Rilakkuma

Page from Wikipedia. There is little information on the net about Aki Kondo. Here you can find Aki’s blog (in Japanese).
Aki Kondo (Born22 februari, 1977, in Matsuyama, Ehime) is a Japanse illustrator and character designer. Former staff at San-X.

Kondo had created and produced “Amaguri Chan” (September 2002), “Mikan Bouya” (December 2002) and Rilakkuma (September 2003) while she was at San-X. Kondo left San-X in 2003, became a freelance illustrator and designer since then. In 2005, Kondo has released the first Manga Comic “Okutan & Danna chan”. 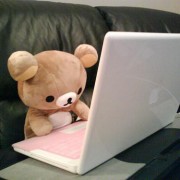 RilakkumaShop.nl Kawaii Cute HanDmAde Jewelry Lots of time and effort goes into creating each and every one of my cute charms, and due to the handmade nature, each and every one is unique! This makes yours a very special one of a kind, made just for you! We do our Kawaii accessories with love, hope they will bring you a lot of happiness everyday. Perfect cute little gift. Love Kawaii cute style polymer clay charm? Want to design your own? Well, here is your chance to create your own charm bracelet. RilakkumaShop.nl